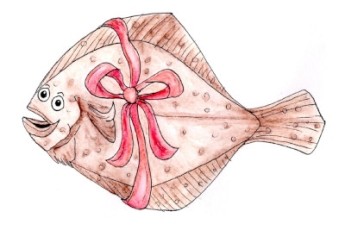 These large octopus are caught in the N E Atlantic and packed in Spain or Portugal. Highly prized on the continent. they are known as polpo in Italy, pulpo in Spain and oktapodi in Greece. Octopus have eight succulent tentacles which are a lot tougher than squid or cuttlefish so need to be tenderised. In some counties they are beaten against rocks, cooked only in copper, or massaged with salt. Usually cooking in simmering water does the trick!

So many of our customers try octopus for the very first time, and without fail they are super impressed with the results. As we say at the Fish Shop - it's not rock science.

You first need to defrost your octopus, either under cold running water or leave in the fridge overnight. Next is the tenderisation. Drop the octopus into a pot of boiling water and allow to gently simmer away. After about 40 minutes check to see if it has lost the toughness by sliding a knife into the thickest 'shoulder' area. If it still has resistance, cook for a little longer - usually no more than an hour. You can add a couple of garlic cloves, a bay leaf and some roughly chopped carrot to the water to infuse some additional flavour

Once it's nice and tender, remove from the pan and it's ready for use in your preferred recipe. At this stage, the tentacles can be removed and frozen if you're not going to require the whole octopus for your dish.

Allow the octopus to cool in the liquid, then remove and cut into thin slices. Strain the liquid, discarding the vegetables but reserving the water


Add the water back into the pan, add the potatoes and cook for 15 – 20 minutes until tender, then drain

Add the olive oil to a frying pan and fry the octopus slices until slightly crisp at the edges. Remove the octopus from the pan and allow the oil to cool slightly


Stir the sweet paprika into the warm oil, then add the octopus back to coat

Place the octopus in overlapping rings on plates, with a pile of potatoes in the centre. Spoon over any of the remaining paprika oil from the pan, and garnish with a few chopped chives and a sprinkling of sea salt